How Burger King Got Me Into Folk Music

It’s probably not too common that a fast food company influences someone’s musical tastes. But that’s just what happened to me. I can trace my current interest in folk music artists such as Pete Seeger, Woodie Guthrie, or The Dubliners, The Clancy Brothers directly to an ad campaign by Burger King.

When I was younger, I had a habit of keeping the TV on, just to have some background noise. As a side effect, I became very familiar with some of the commercials that would be played over and over again. I would even catch myself humming or whistling some jingles at random times. There are a few that I still catch myself singing to this day.

One of those came out when I was in high school in 2004. Burger King introduced a new sandwich, the TenderCrisp Bacon Cheddar Ranch. If you recognize the name, I’m sure you know where this story is headed. 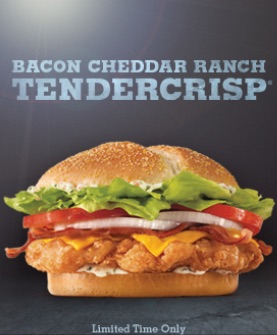 When marketing the TenderCrisp Bacon Cheddar Ranch, Burger King focused a lot on the ranch part of it. They named the campaign Fantasy Ranch, and had commercials with Darius Rucker, of Hootie and the Blowfish, dressed in western garb and singing about an idyllic fantasy ranch where “cheddar paves the street,” and “all the lotto tickets pay.”

The song stuck with me. Every few years, it would pop back into my mind. I would end up back online finding videos so I could listen to it again. One of videos of the commercial on YouTube has been on there since 2006, making it one of the oldest videos on YouTube. At one point I was playing it on repeat because it was only a minute long. I figured that Darius Rucker was a professional musician, there’s got to be a full version out there somewhere. So I started looking.

Turns out, there is no full version of the song. However, I did find a song with a very similar melody. It also has the same theme of a fantasy place far away that seems too perfect to be true. That song was The Big Rock Candy Mountain by Harry McClintock. 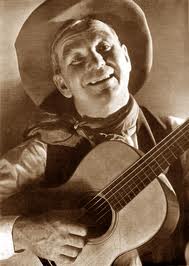 The Big Rock Candy Mountain is a song that was first recorded by Harry McClintock in 1928. It is about a hobo who talks about his idea of paradise, that has rivers of alcohol, lakes of stew, and where you can walk out of jail as soon as you are put in. He claims to have written it back in 1895 when he was hoboing around the United States.

Over time it was cleaned up to be more suitable for children, where the “cigarette trees” were changed into “peppermint trees.” Today it is most well-known as a children’s song, but it had its start in a more adult atmosphere. The original version, with “streams of alcohol” still in it, showed up in the opening scene of the 2000 movie O Brother, Where Art Thou?, which brought the song back to the public attention. I suspect this is what triggered Burger King to use the song in their campaign for the TenderCrisp.

Harry McClintock may have been the first to record the song, but there is some controversy about the actual origins of the song. It’s possible that he wrote the song in its current form, but changed around songs that already existed and changed the lyrics to be about hoboing, based on his own experiences. There is a song that is much older than The Big Rock Candy Mountain, but not only has a similar theme of paradise, but can also be sung to the same tune.

Once I found out about that, I knew I was already into the rabbit hole. But I was too far in at this point, I had to follow and see how far it went. After adding The Big Rock Candy Mountain to my Spotify library, I went to go look for more history. 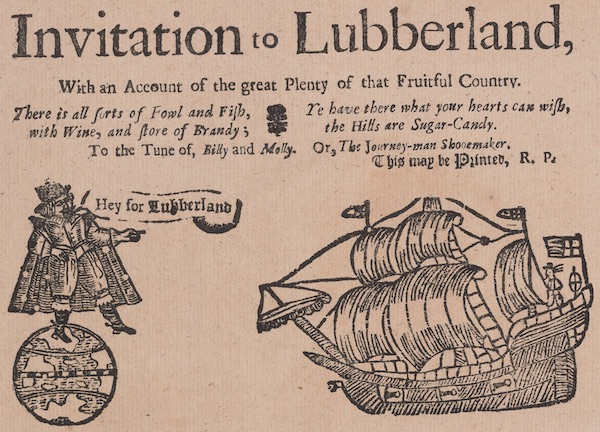 Between the sixteenth and nineteenth centuries in Britain, Ireland, and North America, lyrics to songs written to well known tunes were widely distributed. These were called broadside ballads, and ranged from songs about love and temperance, to comedies and drinking songs. One such song was printed as early as 1685 and is called An Invitation to Lubberland.

This song is about an imagined far away paradise – a theme we’ve come across a few times already! In this rendition, the “streets are paved with pudding-pies,” “fountains flow with brandy,” and the part I find most interesting, “the hills are sugar candy.”

With the current culture of songs coming in and out of fashion so fast, the idea that there were still songs being sung today that had their starts centuries ago was interesting to me. I wanted to find more modern versions of broadside ballads. At around this time, I was recommended a playlist of “Traditional Irish Folk Songs.”

I later found out that a number of the songs on that list are songs that are often sung in Irish pubs. I’ve never been to Ireland, so I can’t vouch for the validity of that, but it makes sense. Broadside ballads were often distributed inside bars for people to sing along to. It made sense to me that the tradition would continue.

Some of the songs that made their way into my library were by The Dubliners, The Clancy Brothers, and some others. One song that goes back quite a long way is The Wild Rover. It’s difficult to pin down an exact origin for this song, but thanks to a post on mudcat, the earliest song that I can find for the origin would be The Good Fellow’s Resolution, a broadside ballad publisheed by Thomas Lanfiere as early as 1678, perhaps in England rather than Ireland. The text in its entirety can be found at English Broadside Ballad Archive at the University of California - Santa Barbara.

There are surprisingly few amounts of changes since the original version. The Good Fellow’s Resolution begins with the verse:

I Have been a bad Husband this full fifteen year,
And have spent many pounds in good Ale, & strong beer
…
For now I will lay up my Money in store,
And I never will play the bad Husband no more.

And now compared to the modern version:

I’ve been a wild rover for many’s the year
and I’ve spent all my money on whiskey and beer.
But now I’m returning with gold in great store
and I never will play the wild rover no more

The original version spans quite a few verses, and seems to be a sincere temperance song about a man who earnestly turns away from a wild life. The modern versions are sung ironically, often while drinking.

After this, finding out the history of certain songs became something of a hobby. I would search the internet for the origins of songs that everybody knows. From Happy Birthday to You to On Top of Old Smokey, I read them all.

One song that really interested me was This Land is Your Land. It was one of those songs that everybody knows, but nobody thinks about who wrote it, when they learned it, or what it’s really about.

It was written in 1940 by Woodie Guthrie, in response to another well-known song, God Bless America. Guthrie’s version was a little less celebratory, however, and was critical of the politics of the era. There are two verses that many people don’t know exist:

Was a high wall there that tried to stop me
A sign was painted said: Private Property,
But on the back side it didn’t say nothing —
This land was made for you and me.

One bright sunny morning in the shadow of the steeple
By the Relief Office I saw my people —
As they stood hungry, I stood there wondering if
This land was made for you and me.

It’s also interesting to note that throughout the song, Guthrie notes a lot of good things about the country, but it’s always about the landscape. This land was made for you and me. When it comes to things concerning people (i.e. the sign, and the hungry people at the relief office), there’s no praise to be found.

Guthrie wrote the words to this song, but as is tradition, it was meant to be sung to an existing tune. The melody comes from the song When The World’s On Fire by the Carter Family. It mostly a religious song, asking the listener to turn to God, as he will provide protection “when the world’s on fire.” While the Carter Family were influential in many different ways, it was really Gutrhie’s take on the tune that sticks with us today.

My first exposure to Pete Seeger was when I was just a toddler. We had a children’s tape which had a recording of his Foolish Frog song. I didn’t know it then, but the same singer who entertained me before I could read would continue entertaining me well into adulthood.

Pete Seeger is one of the most influential folk singers of the twentieth century. He brought a lot of formerly unknown folk songs into the public eye and also wrote many songs today that we recognize. Turn, Turn, Turn was originally his, and The Lion Sleeps Tonight was taken from his rendition of Mbube (which he misunderstood and renamed Wimoweh).

There’s too much to write about Seeger here, but it’s safe to say that many of his songs have found their way into my song rotation. Through investigating the origins to some of the songs he sings, I’ve learned a lot of things about a wide range of subjects, history, language, politics, and civil rights movements.

Back to the Beginning

Just to bring this whole thing full circle, one song that Pete Seeger sang was The Big Rock Candy Mountain.